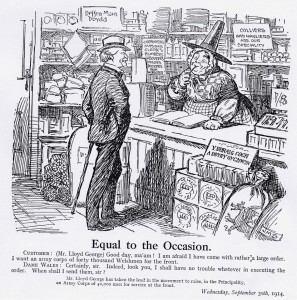 The wartime work of one of Wales’ most influential newspaper cartoonists, J M Staniforth (1863-1921), is to be the focus of an imaginative digital project led by Swansea University and backed by a Heritage Lottery Fund (HLF) grant of almost £70,000.

Best-known for his work in the Western Mail, Staniforth produced daily drawings for the paper during the First World War, depicting Welsh attitudes towards the conflict. He was also famous for creating ‘Dame Wales’ – or Mam Cymru – a middle-aged woman in Welsh costume who symbolised Wales in the same way Britannia and John Bull represented Great Britain.

For the first time, as part of the Cartooning the First World War in Wales project, which spans the centenary commemorations next year of the outbreak of war, Staniforth’s entire Western Mail wartime collection will be reproduced on a new website.

Up to 1,350 digital images of his cartoons will be presented, along with background context and commentary. Cartoons which appeared in other publications, including the News of the World, will also feature on the website.

The project will be led by Welsh historian Professor Chris Williams, who said: “At a time when the Western Mail was the main source of both Welsh and international news for the people of South Wales, Staniforth was a hugely influential figure.

“Staniforth’s cartoons for the paper during the war constitute a remarkable record of one man’s creative response to the conflict. While he sometimes used humour to get his message across, his work was mostly serious in nature, providing as it did a daily commentary on the war’s progress in France and Flanders. He saw his role as that of a morale booster, to drum up public support and belief in the war.” 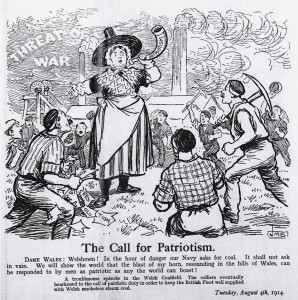 Professor Williams will work closely with Dr Angela Gaffney from the National Museum of Wales, along with other partners including the National Library of Wales, Western Front Association, Llafur: Welsh People’s History Society, Welsh Heritage Schools Initiative and the Historical Association to deliver the project.

Up to 30 volunteers will be trained in techniques to digitise and ‘clean’ the cartoons and to research the period, charting people’s reactions to the cartoons at the time. Around 80 undergraduate students from Swansea University’s History and Classics department will also be involved in the project.

A series of public talks will be held across Wales, as well as academic seminars at Birmingham University’s Centre for First World War Studies and the British Cartoon Archive at the University of Kent. Education resources will be produced, while the project will culminate in a conference at the National Waterfront Museum Swansea in September 2014.

Welcoming the project, First Minister Carwyn Jones said: “These cartoons are a unique portrait of Wales at a time of great upheaval and grief and I am delighted that they will soon be accessible to all. Staniforth’s work may be described as ‘cartoons’, but this shouldn’t diminish their value. His satire held up a mirror to a conflict that shaped us as a nation. They are as important as ever as we prepare to commemorate the centenary of the beginning of the First World War.” 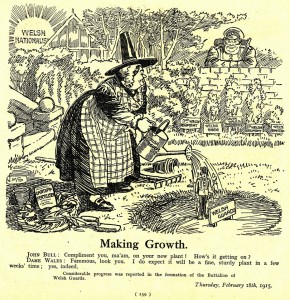 Professor Williams added: “As we approach the centenary of the beginning of the First World War in 2014, there will be a great deal of public interest in the period. This project offers a timely opportunity to gain new perspectives on attitudes towards the war and we’re grateful for the Heritage Lottery Fund’s support, which will help bring Staniforth’s work to the fore once again.”

Jennifer Stewart, Head of the Heritage Lottery Fund Wales, said: “We’re delighted to support this fascinating project, which will put a unique heritage collection online for everyone to use and enjoy when interest in the First World War is growing.

“Through Staniforth’s work, Cartooning the First World War in Wales will investigate popular attitudes and responses to the war, enabling a greater public understanding of this turbulent period.”