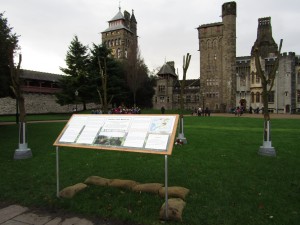 On Thursday 3rd December 2015, the Firing Line Museum of the Welsh Soldier at Cardiff Castle was delighted to officially launch the Welsh at Gallipoli Exhibition. This touring exhibition was created by Anne Pedley of the Royal Welch Fusiliers Museum, on behalf of the Welsh Government which forms part of the Cymru’n Cofio Wales Remembers 1914-1918 initiative. The exhibition housed at the Firing Line between 1st December 2015 and 20th January 2016, had previously travelled to various locations in Wales, from Penmaenmawr to the Regimental Museum of the Royal Welsh at Brecon.

The museum was also delighted to support a Gallipoli memorial that was installed within the grounds of Cardiff Castle and accessible to the visiting public between 17th November – 15th December 2015. This memorial, designed by Nadir Imamoglu, was based on a version of it that was installed at the National Arboretum at Alrewas in Staffordshire. The poignant memorial comprised five oak trees, each the age of an average soldier who fell at Gallipoli. Particularly evocative are the branches of the trees, which resemble hands reaching for the sky reflecting those survivors desperate to be noticed by those medics tasked with rescuing survivors.

The memorial commemorates the campaign, launched on April 25, 1915, to capture a peninsula guarding the Dardanelles Strait in what is modern-day Turkey. Now seen by many as one of the Allies’ greatest disasters, it involved more than 500,000 Allied troops – including 410,000 British soldiers – and was carried out between April 1915 and January 1916. As well as troops from Britain and Turkey, there were forces from France, Australia and New Zealand. The fighting cost 58,000 Allied lives, with another 196,000 wounded or sick, and at least as many victims among the Turkish defenders.

The memorial was dedicated successfully during an opening event, which was formally opened by the Deputy Minister of Culture, Tourism and Sport – Ken Skates AM. The event was also attended by representatives of the Welsh Government, the Australian Consul and members of The Royal Welsh. The official launch of the exhibition was followed by a small dedication of the memorial itself.

The Gallipoli Memorial has been a great success and has had a significant impact on public understanding and awareness of the First World War Centenary. The Memorial and exhibition have highlighted the contribution of both the Welsh and Turkish at Gallipoli; and has helped to promote more widely the Cymru’n Cofio Wales Remembers 1914-1918 commemoration in Wales. In mid-January 5612 people had visited the ‘Welsh at Gallipoli’ exhibit and 33,029 people have accessed the memorial.

The Firing Line is extremely grateful to the Welsh Government for their grant to install the memorial.