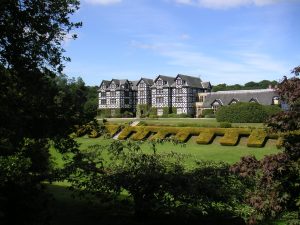 2019 marks 100 years since Gregynog Festival’s first Artistic Director, Henry Walford Davies, became first Gregynog Professor of Music at Aberystwyth University, 1919-26, and first Director of the National Council of Music for Wales, 1919-41: appointments that were funded by Gwendoline and Margaret Davies. The season also celebrates the anniversaries of two foundations sponsored by David Davies: the Department of International Politics at Aberystwyth University and the Temple of Peace and Health in Cardiff.

“We’re delighted to be returning to Gregynog with chamber and early music concerts that are perfect for summer evenings in the Music Room. As an alumna of Aberystwyth University, I’ve always been fascinated by Walford Davies’s aim ‘to further the expression of Welsh nationality in music’, which included appointing the first county music organiser in Wales to Montgomeryshire and making peripatetic instrumental tuition available to adults and young people alike. Other trailblazing initiatives for the nation such as the Department of International Politics and the Temple of Peace would also not have been realised without the generosity of the Davies family, and that’s why the theme of this year’s Festival is Vision.”

Highlights in the historic Music Room at Gregynog, near Newtown, include the Odysseus Piano Trio (Friday, 28 June, 7.30pm) whose concert pays tribute to the Aberystwyth Trio appointed by Walford Davies in 1919 as the first resident chamber ensemble at any University in the world. The Trio gave free weekly concerts to students and townspeople and even shared the platform with Béla Bartók when he made his UK début at Aberystwyth in March 1922.

Gregynog also hosts A Nocte Temporis, directed by the tenor Reinoud Van Mechelen, in a beautiful programme of arias by Bach (Saturday, 29 June, 7.30pm). Flemish tenor Van Mechelen and French Baroque ensemble A Nocte Temporis, featuring the flautist Anna Besson, are the rising stars of the early music world and this will be their début appearance in Wales.

The Davies family’s interests in peace and European culture are explored in an afternoon programme of talks at Gregynog by Dr Jan Ruzicka (Saturday, 29 June, 2.30pm) and Craig Owen (Saturday, 29 June, 4.00pm). Jan is the Director of the David Davies Memorial Institute at the Department of International Politics, Aberystwyth University, while Craig is the Head of Wales for Peace at the Temple of Peace and Health in Cardiff.

the Guardian and fRoots. Catch them while you can in an intimate acoustic concert to open the 2019 Festival season.

Another chance to hear VRȉ, this time in the former chapel that has become a popular recent Festival venue. Afternoon tea at Cwpan Pinc is included in the

A lecture that considers Walford Davies’s ambition ‘to further the expression of Welsh nationality in music’ and his visionary initiatives that were bankrolled by the ‘boundless generosity’ of Gwendoline and Margaret Davies.

Another opportunity to hear the Artistic Director’s introduction to the season curation, this time as a pre-concert talk at Gregynog.

Core classical repertoire and music by Welsh composers associated with the Aberystwyth Trio, the first resident chamber ensemble at any University in the world.

Dr Jan Ruzicka, ‘Considering all the peoples of the world as one’: David Davies and international politics

The Director of the David Davies Memorial Institute considers how the world’s first Chair of International Politics came to be founded at Aberystwyth University in 1919.

Craig Owen, David Davies and the Temple of Peace

A lecture by the Head of Wales for Peace to mark 80 years since the Temple of Peace and Health opened in Cardiff to commemorate the men and women of all nations who died in the Great War.

Erbarme dich, an all-Bach programme of arias for tenor, flute, cello and harpsichord, performed by the multi-award-winning Flemish tenor and French Baroque ensemble.

Music by Walford Davies, William Mathias and other Aberystwyth composers who have played the Chapel’s fine Frederick Rothwell organ over the years.