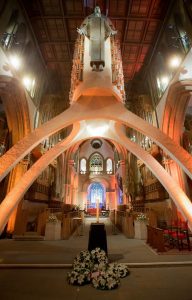 First Minister, Carwyn Jones, will today mark 100 years since the end of the First World War at a National Service of Thanksgiving at Llandaff Cathedral.

The service will be attended by Their Royal Highnesses The Earl and Countess of Wessex, as guests of the First Minister. The Address will be given by The Archbishop of Wales, The Most Reverend John Davies.
During the service, the congregation will hear readings from Nia Haf and Ethan Williams from Urdd Gobaith Cymru and Mari Wyn Jones from Ysgol Maes Garmon in Mold.

Speaking ahead of the service, the First Minister said: “Each Remembrance Sunday is an opportunity to pay tribute to the men and women who have served to protect the peace we are privileged to enjoy in Wales today.
“This Remembrance Sunday is particularly poignant, as we mark 100 years since the end of the First World War. Today, we remember the sacrifice of servicemen from Wales during the war. We also remember the countless men, women and children who played pivotal roles on the home front and shaped our society in ways no generation had done before.

“To this remarkable generation, we give thanks. Their contribution and legacy will endure.”

The Archbishop of Wales, The Most Reverend John Davies, said: “We gather to give thanks for the end of what remains one of the most significant, brutal and wasteful conflicts in the world’s history. May today’s remembering and reflecting on the First World War lead us personally to commit positively in making every effort to make our world, our nation, our communities, the kind of place which those whose lives we honour believed they were fighting to build. Any unwillingness to make that commitment risks devaluing the sacrifices of all who have fought for justice down the centuries, not least those who will be particularly in our minds this coming weekend.”

Over the past four years, the First Minister has led the Welsh Government’s centenary commemoration of the First World War, Cymru’n Cofio Wales Remembers 1914-1918. The programme has delivered national events, exhibitions, community based activities and education programmes across Wales, inviting people of all ages to reflect and learn more about this important period in our history.

The First Minister added:
“I am proud to have been part of the commemorative programme that has fittingly marked all aspects of the First World War and the impact it had on the country. I am particularly pleased with the way people have embraced the Cymru’n Cofio programme, with communities up and down the country recognising the sacrifices people in Wales made, from large scale events such as Mametz Wood and Passchendaele, to school projects which are helping to create a Wales-wide archive of the people from our communities who died during the conflict. The response has been remarkable.
“I hope through the work that has taken place over the past four years our current and future generations will gain a greater understanding of the significance of the events of the First World War and avoid the mistakes of the past. That would be a worthy legacy of this programme of commemoration.”