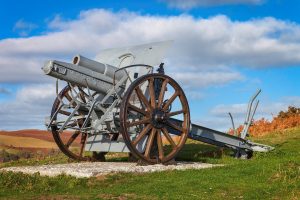 The Garth Gun, one of Britain’s last surviving German trophy guns from the First World War, has been listed by Cadw in time for the centenary of that conflict’s end. The artillery piece — a 105mm light field howitzer — stands on Twyn y Garth with sweeping views over the Wye valley and the village of Erwood in Powys. It is said that a local woman, Nessa Williams-Vaughan (later Mrs Lionel Trafford) obtained the gun from the War Office to serve as a memorial for her brother, Christopher, and other local men who had died in the First World War. She was killed in a car accident — reputedly Herefordshire’s first fatal one — before the gun could be delivered in 1920. Yet, her wishes were carried out by the communities of Erwood and Llandeilo Graban, who dragged the howitzer up the slopes of Twyn y Garth and fixed it in place.

After decades of exposure to the elements, the gun had deteriorated badly by 1999. However, Painscastle Community Council restored it as a millennium project with the assistance of 6th Battalion Royal Electrical and Mechanical Engineers and local craftsmen. It has now been listed as a rare survival of the thousands of enemy field guns that were once scattered across the United Kingdom in the aftermath of what many hoped would be the ‘war to end all wars’.

Before the First World War centenary observances began in 2014, Cadw had listed almost 240 war memorials across Wales ranging from horse watering troughs to hospital buildings. Many more are in or around listed civic buildings or places of worship. Yet some noteworthy memorials, like the Garth Gun, had escaped designation. 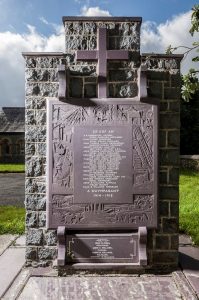 Another recently listed monument is in the village of Nantlle, on the western flanks of Snowdonia.  It is a carved slab of deep purple slate, which was quarried, worked and erected in 1922. The Welsh inscription remembers 14 slate workers from the nearby Penyrorsedd quarry. Originally placed in the quarry, the memorial was later moved to its present location in front of the village chapel.

The names of the fallen are surrounded by intricately carved scenes of the working life that the men would have known at the quarry. Two workers watch slate being hauled up the quarry face to a workshop for processing. Finished slates descend on an inclined railway to be carted away. Across the bottom of the memorial, however, is a panorama portraying infantry moving forward into a blasted battlefield of trenches and artillery emplacements, reminding the viewer of the men’s sacrifice.

Now this memorial is not only a poignant reminder of the cataclysmic impact of the First World War, but also of a once thriving industry in the mountains of north Wales.

As part of Cymru’n Cofio Wales Remembers 1914-1918, the centenary programme of commemoration of the First World War led by the Welsh Government, Cadw launched the Grants for War Memorials in Wales scheme. Developed in partnership with the War Memorials Trust, the scheme has provided funding for the repair and conservation of memorials in almost 50 communities across Wales. Applications will continue to be accepted until March 2019.