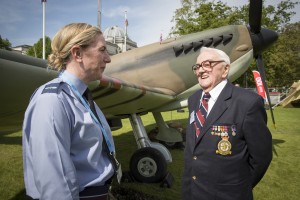 THE RAF said farewell to Cardiff today after thousands of people came to see aircraft from the last 100 years on display outside City Hall.

The event, which saw over 23,000 people attend was bathed in glorious sunshine for the full three days and was part of celebrations to mark the mark the service’s 100th year.

Veterans, cadets, scouts and brownies from across South Wales were among those attending the event which was held between Friday 18 and Sunday 20 May.

The Walsh family from Cardiff was just one of thousands of families who enjoyed the tour. Dad Dan Walsh said: “It’s a brilliant event and the kids really loved playing in the science tent and doing all the tasks. We’ve all had a great time.”

A Spitfire from the Second World War, a modern Typhoon jet and a First World War Sopwith Snipe fighter were among the aircraft on display over the weekend in the centre of Cardiff.

People could also see a Harrier jump jet and a Wessex search and rescue helicopter. 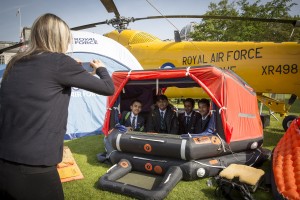 The RAF’s senior officer in Wales, Air Commodore Adrian Williams, said: “I’d like to thank the people of Cardiff for the fantastic welcome they’ve given us over the past few days. They have come in their thousands to see the aircraft which tell our 100-year story and I hope they have enjoyed this and the science activities over the weekend.”

The event marked the start of the RAF100 Aircraft Tour which will visit five other cities across the UK with the next date being Horse Guards Parade in central London between 6-9 July.