THE RAF Ensign was hoisted at Cardiff Castle today highlighting the RAF National Aircraft Tour which arrives in the capital in four weeks’ time. 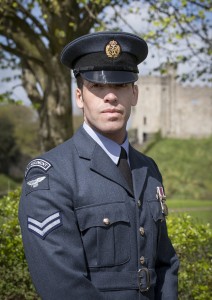 One of the airmen raising the Ensign was Corporal Tom Woodward from Trellech in Monmouthshire.  He joined the RAF Regiment in 2007 and completed three tours of duty in Afghanistan before becoming a reservist. He said: “It was really special to play my part in marking the RAF’s 100th birthday today. Hundreds of thousands of people will see our flag flying in the capital over the next weeks and as a Welshman and a member of the RAF, that makes me very proud.”

On 1 April 2018, the Royal Air Force launched RAF100, a national campaign to mark its 100th year. The centenary features events, activities and other initiatives running nationwide from April to the end of September 2018. One of the biggest events, the RAF100 National Aircraft Tour, arrives in Cathays Park, Cardiff on 18 May.

Among the famous aircraft on display will be a Second World War Spitfire and a Typhoon jet from the present day.

The Spitfire, kindly loaned by IWM Duxford (part of the Imperial War Museums), wears the markings Number 19 Squadron which served during the Battle of Britain when the RAF thwarted plans for a Nazi invasion of Britain. This Spitfire was flown by Sergeant Jenkins and shot down four enemy aircraft.

Representing the present and the future will be a Typhoon fighter jet – the aircraft that is on alert 24 hours a day, 365 days a year, ready to scramble in defence of the UK. 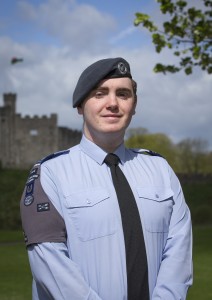 Also attending was Cadet Corporal Caisel O’Hare of 1344 Squadron RAF Air Cadets based at Maindy in Cardiff. He said: “As a member of the RAF Air Cadets, and so a part of the wider RAF community, I feel really honoured to be a part of the RAF100 celebrations. It’s inspiring to think of all the opportunities that are available to me, especially in the STEM environment.

“I’ve been a part of the Air Cadets for five years now and there’s never been a better time to be involved. I think it’s really important to remember the people who went before us and to show support for the men and women of today’s RAF.”

The salute was taken by the senior RAF Officer in Wales, Air Commodore Adrian Williams who said: “As a Welshman who has spent his whole career in the RAF, it’s a proud day for me to be here in Cardiff raising the RAF Ensign over our capital city. We are delighted that the Welsh Government is supporting a programme of raising the RAF Ensign across all Local Authority areas.  This RAF Ensign raising programme is now well underway and will be complete by 10 July, which is when the RAF will have its main Centenary Parade and Flypast in London.  As part of the RAF Centenary, there are a number of events happening across Wales, with a particular highlight being the RAF 100 National Aircraft Tour.”