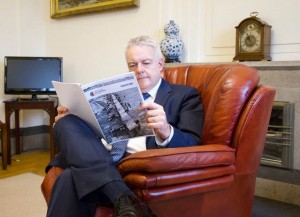 Programme 2018 is the latest in the Welsh Government’s series of annual Cymru’n Cofio Wales Remembers 1914-1918 brochures, which highlights events and projects of Welsh interest, taking place in Wales and further afield throughout the year. It also includes a range of articles written by partner organisations on commemorative plans and historical events. The launch coincides with the First World War Partnership Day 2018 held in the Pierhead Building, Cardiff Bay on 30 January.

This year’s focus will be the centenary of the Armistice on Sunday 11 November.  The National Service of Remembrance will take place at the National War Memorial in Cardiff in the morning to be followed by another commemorative service later in the day.

This year also marks the centenary of the Royal Air Force. The centenary itself will be marked by special events, activities and initiatives throughout 2018. Wales will play a part when the National Aircraft Tour comes to Cardiff City Hall Gardens from the 16th – 20th May 2018. Other events will be held across Wales enabling the public to engage in the centenary. These activities follow on from an event held at Llanystumdwy on 12 January to mark the centenary of Prime Minister David Lloyd George’s role in the formation of the RAF.

Other key events include 14-18 NOW, the UK’s cultural programme for the First World War centenary, launching their project Now the Hero / Nawr yr Arwr, as part of Swansea International Festival in September.

Nawr Yr Arwr (Now The Hero) is an immersive theatrical experience from Welsh artist Marc Rees that will take visitors on an extraordinary journey through three intertwining narratives of war via a military storming, a raucous wedding party, a protest dance and an ancient wake. The work is inspired by the little-known British Empire Panels painted by Frank Brangwyn that were originally commissioned by the House of Lords to commemorate the First World War, and includes a new requiem composed by double Oscar-nominee Jóhann Jóhannsson.

Another highlight will be a film by Peter Jackson, best known for directing The Lord of the Rings trilogy, who has been commissioned by 14-18 NOW and the Imperial War Museums to create a film on the First World War. Footage from the Imperial War Museums’ extensive First World War film archive and audio from the IWM and BBC archives will be restored, and the film will be screened in cinemas and schools across the UK, before being broadcast on BBC One in November 2018. Accompanying resources are being developed and distributed to secondary schools and the Welsh Government is providing funding to ensure engagement across Wales.

“Cymru’n Cofio Wales Remembers 1914 – 1918 gives us the opportunity to remember the lives of those who served in the First World War.

“Programme 2018 continues the outstanding level of engagement across the whole of the country, which acknowledges the sacrifices made by the people of Wales, as well as the rest of the UK and allied forces, during the First World War.

“It is vital that future generations understand how this terrible war affected Modern Wales, and ensures that we learn from the past in safeguarding a peaceful future.

“The Welsh Government is committed to continuing to support and develop targeted commemorative activities and to present a strong national identity for Wales’ centenary commemoration of the First World War as part of its Cymru’n Cofio Wales Remembers 1914-1918 programme, which will continue until March 2020.”

To find out more about events happening around Wales in 2018, go to www.walesremembers.org