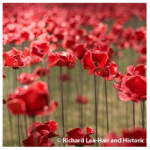 Tickets for Wales’s first exhibition of the iconic poppy sculpture Weeping Window have today (22 July) been released to the public.

The striking Weeping Window artwork commemorating the First World War — featuring thousands of ceramic poppies — is to go on display at Caernarfon Castle from 12 October, as part of a tour organised by 14-18 NOW, the UK’s arts programme for the First World War centenary.

The installation will be displayed inside the castle daily until 20 November, making it available to the public on both Remembrance Day, and the centenary of the end of the Battle of the Somme (17 November).  It will flow from the Watch Tower inside the castle walls and onto the grass below.

Morning and afternoon advance tickets will be offered for free online via Cadw’s Eventbrite, while an extra 1,000 people will be granted access on the door each day.

Weeping Window is one of two sculptures taken from the installation Blood Swept Lands and Seas of Red — poppies and original concept by artist Paul Cummins and installation designed by Tom Piper — by Paul Cummins Ceramics Limited in conjunction with Historic Royal Palaces.

The installation was originally at HM Tower of London from August to November 2014 where 888,246 poppies were displayed, one to honour every death in the British and Colonial forces of the First World War.

Following the success of the original artwork, which attracted more than five million visitors in 2014, 14-18 NOW is presenting Weeping Window and a second sculpture, Wave, at various venues across the UK throughout the centenary of the First World War.

The Welsh Government’s historic environment service, Cadw, organised a successful bid to host the monumental artwork at Caernarfon Castle in November 2015. The programme aims to prompt further nationwide dialogue around the legacy of the First World War.

Cabinet Secretary for Economy and Infrastructure, Ken Skates, said: “The people of Wales, as with many European nations, endured loss of an unimaginable scale during the First World War. Now, the arrival of Weeping Window to Caernarfon Castle marks a unique chance for the modern Welsh public to engage with the reflective experience and commemorate those lost.

“We have been proud to lead the nation’s commemorative programme, Cymru’n Cofio Wales Remembers 1914-1918, and the poppies sculpture is a key addition to the many commemorative events planned by organisations and individuals across Wales.

“With more than 700 years of history and World Heritage Status to its name, I could not think of a more proud and fitting location for the sculpture, and urge people to come and see this culturally significant reminder of the cost of one of humanity’s greatest conflicts.”

Support from the Backstage Trust and Clore Duffield Foundation has enabled 14–18 NOW to bring Weeping Window and Wave to a select number of special locations for a limited time, before they are gifted to the Imperial War Museums in 2018.

In addition to the installation, the First World War Book of Remembrance will be displayed within the Royal Welsh Fusiliers’ Museum, located within the castle grounds. Visitors will be able to interact with the names of the 35,000 Welsh men and women who lost their lives — to discover the stories behind the soldiers, the impact of the loss of a generation on local communities, and lessons for today.

Info: Visitors are invited to commemorate the First World War by visiting Weeping Window – the spectacular art installation derived from from the original Tower of London ‘Poppies’ – during its residency at Caernarfon Castle.

Booking: Advance morning and afternoon tickets can be booked via www.caernarfonpoppies.eventbrite.co.uk. A further 1,000 tickets will be made available on the door each day.