The community of F

ron-goch, near Bala, will come together today [Saturday, 11 June] to commemorate the centenary of a significant event in its history when over 1,800 prisoners from Ireland were brought to rural Wales.

A camp at Fron-goch had already been used for German prisoners, and on 11 June 1916 Irish prisoners arrived following the Easter Rising.  They remained in Fron-goch until December that year.

The community event at Fron-goch, involving the local school which is built on part of the camp’s site, aims to build awareness and understanding locally about the area’s history during this time.

It includes an exhibition at Ysgol Bro Tryweryn, walking tours of the site and a series of speakers including the Ambassador of Ireland, Daniel Mulhall.

The event, facilitated by Snowdonia National Park Authority, is part of the Cymru’n Cofio Wales Remembers 1914 – 1918 programme of events which commemorates key global events which took place during this period and their impact on communities in Wales, including very rural areas such as Fron-goch.

Ambassador Daniel Mulhall, Ambassador of Ireland said: “I am pleased to support the work of the Welsh Government and the local community in North Wales in remembering the history of Fron-goch. Some 1,800 Irish men were interned at Fron-goch after the Easter Rising of 1916 and Fron-goch is a significant place in both Irish and Welsh history.  I am particularly pleased that the local community has engaged in the commemoration with such enthusiasm. As we mark the centenary of the Easter Rising, a truly momentous event in Irish history, projects like this provide an opportunity to explore our shared and overlapping histories, to remember the past in an inclusive manner, and to reflect on and advance further the productive journey of reconciliation on which Ireland and Britain have been embarked for decades now.” 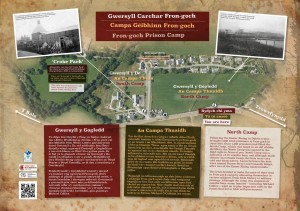 Councillor Elwyn Edwards, Member of the Snowdonia National Park Authority and Chairman of the Fron-goch Committee said: “ The Fron-goch 1916-2016 project has brought the community of Fron-goch together to remember this incredible period in this area’s history.  By commemorating this centenary, we are joining together communities in Wales and Ireland to remember the history which we share.  This project allowed us to raise awareness of our history and culture within the local community and beyond and we are extremely grateful to the staff and pupils of Ysgol Bro Tryweryn for their substantial contribution to this project.”

Heledd Wyn Owen Head of Ysgol Bro Tryweryn said: “We are looking forward to welcoming everyone to Fron-goch for this very special commemoration of the area’s history.  The children have been able to learn about their area’s history and heritage.  The pupils were involved in a number of projects including composing a poem to remember with the poet Myrddin ap Dafydd, composing a tune and a song for the poem with Robat Arwyn, and creating a mural which interprets the history with the potter Neil Dalrymple.  The children will be looking forward to performing their song on the day.” 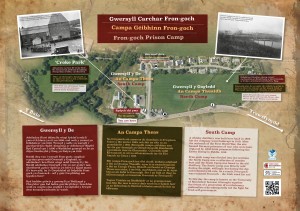 er of Wales Carwyn Jones said: “Cymru’n Cofio Wales Remembers 1914 – 1918 provides an opportunity for young people to understand their history, and to find out how their local area was affected by the tumultuous events which took place in the world between 1914 and 1918.  There is no part of Wales which was not touched in some way during that time, and it is important for communities to come together and commemorate these events.

“It is positive to see how the local school here has been an integral part of the commemoration, and those young people will now be more aware of their area’s history and its connection with the wider world”