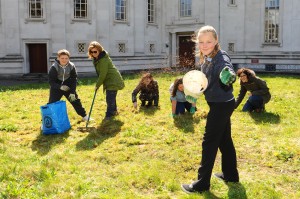 Following last year’s vast range of activities to mark 100 years since the start of the First World War, this year Amgueddfa Cymru – National Musuem Wales will continue to commemorate the war with a series of new exhibitions, events and projects across all its seven sites.

In 2015, Amgueddfa Cymru will be focusing its activities on the experience of living through war and the themes of loss and remembrance, looking at the impact for people at home and those fighting and working in the arenas of war. Working with partners and communities across Wales, Amgueddfa Cymru will explore links between the past and present experience of war, and provide further access to its collections through events and digital media.

Highlights of the events and exhibitions programme across the national museums in 2015 include:

Visitors to National Museum Cardiff over the weekend helped museum scientists by sowing, swapping and harvesting poppy seeds in the urban meadow outside the museum to remember those who have fallen in all wars. For the rest of the commemoration period, the poppies will provide an annual reminder and a place to gather and reflect.

An exhibition commemorating the Christmas Truce of 1914 will also be displayed at National Museum Cardiff from 21 April – 31 May. The display celebrates the famous ceasefire between German, British and French forces, in which gifts and carols were exchanged, joint burials undertaken and troops from both sides played games of football.

The National Roman Legion Museum in Caerleon will show their exhibition ‘Death at a Distance’ until October 2015. This exhibition explores the experience of the soldier in ancient and modern times through the development of artillery warfare across the ages.

The National Waterfront Museum in Swansea hosts an exhibition investigates the link between the cultural uses of poppies for remembrance and the science of biodiversity ‘Poppies for Remembrance’ from 4 July until October.

The National Slate Museum will focus on recruitment in their new exhibition, ‘For Freedom and For Empire’ which opens in July 2015. It looks at the responses of the slate quarrying communities to the recruitment campaign which preceded conscription, and explores how these communities responded to this call to war.

In Big Pit National Coal Museum, the focus will be on the experience of ordinary miners recruited to the front line as expert tunnellers in the exhibition ‘When Dai became Tommy’ which runs from February to September 2015. Community groups have been involved throughout in collecting and sharing these stories. The exhibition then travels to the National Wool Museum from September 2015.

Big Pit also hosts another exhibition from October 2015 which explores the impact of the war on the working lives of men and women in Wales, ‘Working for Victory – Welsh Industry and the First World War’.

St Fagans National History Museum has an extensive programme of community engagement and family activities planned for the year ahead. July will see the launch of the St Fagans Castle trail, telling the story of the Castle during the war and its use as a hospital for recuperating soldiers. A programme of talks and family activities is planned throughout the year which will shine a light on this hidden history.

Another exciting project is the partnership with Music Theatre Wales and the Royal Welsh College of Music and Drama: ‘Make an Aria’. Serving military personnel and students from the college have already been studying objects from the period together, and from this students will compose the music for a performance at the Museum in July 2015.

The St Fagans National History Museum’s community engagement and events programme is funded in part by a grant from the Armed Forces Community Covenant Fund, who are supporting the redisplay and digitisation of the Armed Forces collections and associated programming as part of a major re-development project at St Fagans.

Amgueddfa Cymru is digitising its collections to make them accessible to a wider audience. Work will continue on a new online digital database of objects in the Museum’s collections from the First World War.

Admission to all Amgueddfa Cymru – National Museum sites is free, thanks to the support of the Welsh Government.