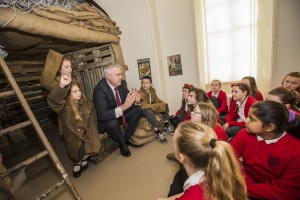 Key moments in Wales’ history during the First World War, including the Gallipoli Campaign, will play an important part in the events planned this year to mark the conflict’s centenary, First Minister Carwyn Jones has said.

The First Minister announced the Welsh Government’s plans for the commemoration of the First World War in 2015 during a visit to the Christmas Truce exhibition at Bodelwyddan Castle which forms part of the Cymru’n Cofio Wales Remembers 1914-1918 centenary programme.

The Welsh Government will be commissioning a touring exhibition on the Welsh at Gallipoli which will be launched in August and will tour until January 2016.  Welsh forces arrived in Gallipoli on the 9th August 1915 and suffered heavy losses at Sulva Bay on the 10th.  These losses were particularly felt in North Wales as the 6th and 7th Royal Welch Fusiliers were local Territorial battalions, and this day has been called one of the blackest days of the war for the region.

Wales’ contribution at the Battle of Loos will also be remembered, which was the largest British offensive mounted during 1915 on the Western Front.

Other activity in 2015 will include:

The First Minister said: “This year will see the centenary of significant events during the First World War which touched families and communities across Wales.  These include the Gallipoli Campaign which particularly affected communities in North Wales, where the war memorials testify to the terrible impact of the battle on the 10th August 1915.

“It is fitting that we remember these events as we continue to mark the centenary of the First World War which changed so much in Wales and further afield.”

During his visit to the Christmas Truce exhibition the First Minister also met pupils from Ysgol y Faenol, Bodelwyddan. 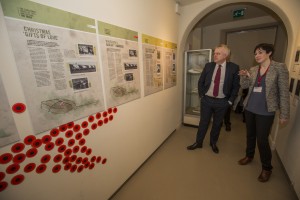 He said: “It is important that future generations are made aware of what happened during this time, and how it shaped the world we live in now. I am pleased to have met Ysgol y Faenol who are among the many young people who have had the opportunity to see this excellent exhibition at Bodelwyddan Castle.”

Secondary schools  have the opportunity to apply for grant funding for projects linked to the First World War. A grant to refurbish war memorials in communities across Wales is also available.  Further details are available on: http://learning.wales.gov.uk/news/sitenews/grant-funding-for-first-world-war-commemorations/?lang=en and