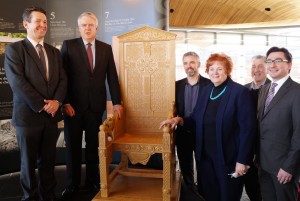 Hedd Wyn was awarded the chair for his poem Yr Arwr (The Hero) at the National Eisteddfod in Birkenhead in 1917, six weeks after he died fighting in the First World War.

The chair, awarded posthumously, was famously draped in black during the chairing ceremony, which has led to its distinct name.

The Welsh Government has funded a partnership of Cardiff University, National Museum Wales and the Snowdonia National Park Authority via CyMAL, to use the latest 3D printing technology to create a full size replica of the Gadair Ddu. The chair will remain on display at the Senedd until   the end of March, when it will then be used to interpret the story of Wales and the First World War.

Speaking ahead of the unveiling First Minister Carwyn Jones said: “Hedd Wyn is one of Wales’ most celebrated and influential poets.

“As we commemorate one hundred years since the outbreak of the First World War, the Gadair Ddu has become a symbol of the devastating impact the Great War had on communities and families across Wales, many of who lost fathers, brothers, uncles and sons to the conflict.

“This is true of Hedd Wyn, whose tragic death on the battlefield in Flanders in 1917 meant he could never claim his Eisteddfod chair, now known as the Black Chair.

“It’s therefore fitting that we’ve been able to fund this replica of what has become one of the truly iconic Eisteddfod chairs. It’s a beautiful piece created using the latest technology in 3D printing. I urge people to come and see it, not only to remember Hedd Wyn, but to also commemorate the fallen. I also congratulate Cardiff University for demonstrating how Wales is leading the world in using cutting edge technology to bring history to life.”

Rob Aldridge, Managing Director of Drumlord Ltd said: “This was a wonderful project to

work on and allowed us

to show how the very latest technologies can be combined with already well established, traditional techniques to deliver top quality models.  The original chair is very much a part of the cultural history of Wales and the reproduction is a reverential nod to a rich and important past while also looking firmly at the future.” 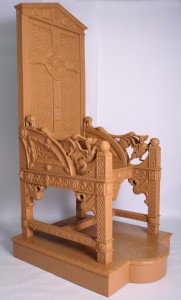 Commenting on the partnership between Snowdonia National Park, National Museum Wales and Cardiff University School of Engineering, Professor Phil Bowen, Director of the School said that he was “delighted that the combination of collaborative working and high value manufacturing technologies in Wales has been able to shine a new light upon one of the most poignant stories of the First World War”

He said, “Since the mid-1990s the Additive Manufacturing Laboratories at Cardiff University School of Engineering have generated a fantastic research and development reputation in what is now often referred to as 3D printing technologies working on components going into space with the Ariane rocket family, on the F1 race track, as well as for deep-sea submarine applications”.

Prof Bowen continued, “through the vision of the partners and the expert execution of our additive layer manufacturing team, co-working with Drumlord Ltd, I believe that we have been able to do justice to the outstanding visual and technical achievement of the maker of the original Y Gadair Ddu (the Black Chair), Eugeen Vanfleteren.”

The Black Chair, Re-creating a Masterpiece