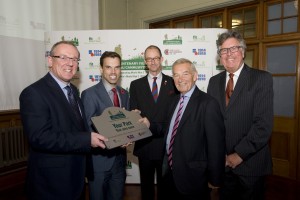 On 21 October Fields in Trust and The Royal British Legion launched Centenary Fields in Wales with a reception at the National Assembly for Wales. Centenary Fields will create a living legacy in communities across the country, and the wider UK, by securing outdoor recreational spaces in memory of the many who gave their lives during World War I. It ensures that there will be places to remember their sacrifices, but crucially that valuable green space is protected for future generations to enjoy themselves.

The reception, sponsored by Aled Roberts AM, saw Ken Skates AM, Deputy Minister for Culture, Sport and Tourism launch the commemorative programme in Wales. Leaders in Welsh sport, philanthropy and government were in attendance at this important event. The first Centenary Field in Wales has been identified by the Vale of Glamorgan Council as Alexandra Park in Penarth.

The Deputy Minister said “I am honoured to launch and support the Centenary Fields Campaign in Wales. It is so important that we continue to remember all those who were involved in so many different ways in the First World War. This campaign will protect our precious green spaces and ensure a lasting legacy for future generations.

“This year, as we mark the centenary of the terrible events that began to unfold in 1914, it is clear that there is still a strong will to continue to remember. We have been proud to lead the nation’s programme to commemorate the centenary, Cymru’n Cofio Wales Remembers 1914-1918. We must never forget the sacrifices that were made for peace and freedom and the important role Welsh people played in securing this for us.”

Ivor Morgan, Chairman Fields in Trust Cymru said “Centenary Fields is a fitting and unique way of marking the sacrifices made by servicemen and women 100 years ago in World War I. We are delighted that Carwyn Jones AM, First Minister of Wales is supporting this programme alongside the Deputy Minister for Culture, Sports and Tourism. We look forward to other Assembly Members and all of the local authorities across Wales joining us as we create this living legacy”.

Phil Jones, The Royal British Legion’s Area Manager in Wales, said “As the nation’s Custodian of Remembrance, the Legion has a special role to play in the UK’s Centenary commemorations. Our partnership with Fields in Trust ensures that we are helping to preserve these important memorials, often found in community spaces that form a vital part of local heritage and play a key role in educating the next generation about the significance of Remembrance.”