The heritage of the peace movement in Wales can now be researched and discovered in depth as a result of a £918,000 grant awarded by the Heritage Lottery Fund (HLF) to the Welsh Centre for International Affairs. 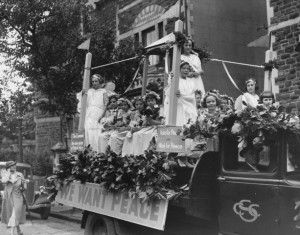 The Cymru dros Heddwch/Wales for Peace project will span four years, focusing on one central question: in the 100 years since the First World War, how has Wales contributed to the search for peace? Using the First World War as a starting point, the project will explore personal accounts of ’peace builders’ from Wales in the last century, including notable musicians, poets, pacifists and conscientious objectors, politicians and community leaders.  It will shed light on this little known aspect of Welsh heritage and will conclude with a travelling exhibition of the project’s findings.

Jennifer Stewart, Head of the HLF in Wales said, “As we continue to mark and commemorate the First World War 100 years since it began, it is really interesting to see a project which focuses on a  lesser known story to have emerged from the conflict; Wales’ role in the search for peace. This is an in-depth project with a number of different themes all aimed at understanding more about Wales’ ‘peace heritage’ and we look forward to seeing the project develop as it is taken across Wales.”

Using the First World War as a starting point, the project focuses on researching and discovering the peace movement in Wales by working with the people and organisations that have played a part in this largely untold history.

Divided into five themes, the project is multi-faceted and will include the digitisation of Wales’ Books of Remembrance, housed in Cardiff’s Temple of Peace, followed by a touring exhibition of the books which list the 35,000 servicemen killed in the conflict.

First Minister of Wales, Carwyn Jones said: “Through our centenary commemoration programme, Cymru’n Cofio Wales Remembers 1914-1918, we’re encouraging people across Wales to commemorate the First World War in the manner of their choosing.

“I’m therefore delighted that The Wales for Peace project has received this grant from the Heritage Lottery Fund. We must never forget the role that Wales played in the search for peace – all the way from the First World War to the present day.

“I hope that this project provides a very poignant reminder of the outcomes of the war and its legacy for Wales during the past century and for future generations.”

Martin Pollard, Chief Executive of the WCIA said, “We’re extremely grateful to have received this grant from HLF. The funding will give us the opportunity to uncover a part of Welsh heritage that has remained largely untold and enable us to place the search for peace within the national story of Wales.”