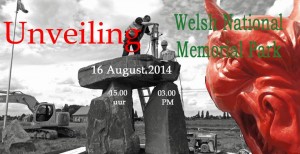 The First Minister, Carwyn Jones, will today travel to the village of Langemark in Belgium to unveil a new memorial dedicated to all those from Wales who took part in the First World War.

The dedication and unveiling ceremony is the culmination of several years campaigning and fundraising by the Welsh Memorial in Flanders Campaign Group for a lasting memorial to the services of Welsh men and women during the First World War. 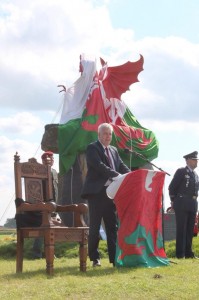 The memorial is comprised of a cromlech made of four Welsh Blue Pennant stones from the Craig yr Hesg quarry near Pontypridd and surmounted by a red bronze dragon, designed by Welsh artist Lee Odishow.

The Welsh Government has supported the Campaign Group’s efforts from the outset and has agreed to underwrite a shortfall of up to £25,000 in the funding raised for the memorial by the Campaign Group in Wales and Flanders.

Soil gathered recently from the summits of Snowdon, Pen y Fan and the home of Hedd Wyn, Yr Ysgwrn, will be placed at the base of the memorial as part of the dedication ceremony. The First Minister will also lay a wreath with a hand-written message on behalf of the people of Wales.

Speaking ahead of his visit to Belgium, the First Minister said: 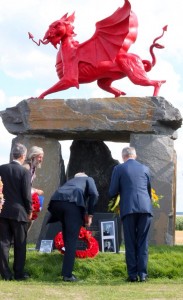 “This year we mark the centenary of the start of the First World War. It is timely that we should be unveiling this memorial now, as a mark of respect and remembrance for all those from Wales who faced unimaginable adversity here. The sacrifices they made and the freedom for which they strived for is why we must continue to pay tribute today.

“I congratulate all involved in this very important campaign. This impressive monument is testament to the enduring need to continue to strive for peace in our own time.”

Between 800 and 1,000 guests are expected to attend the unveiling ceremony, including local residents who have been supportive of the campaign and hold a monthly remembrance ceremony for soldiers serving in the area during the First World War. 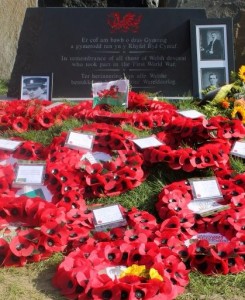 The First Minister will also be joined by Dr Andrew Murrison MP, the Prime Minister’s Special Representative for the Centenary Commemoration of the First World War,  Minister-President Geert Bourgeois of the Government of Flanders and the Mayor of Langemark-Poelkapelle, Alain Wyffels.

“As the coordinator of the campaign for four years, I feel extremely proud and gratified that this day has come about.  I have to thank a wonderful committee, the Welsh Government, and the generosity of the ordinary people of Wales who have made this possible.  Diolch yn fawr i bobl Cymru”

The First Minister leads the Welsh Government’s centenary commemorations, Cymru’n Cofio Wales Remembers 1914-1918. Working with key organisations, the aim is to deliver an inclusive programme with national events and exhibitions, accompanied by community-based activities, for example researching local war memorials, together with a variety of educational projects.