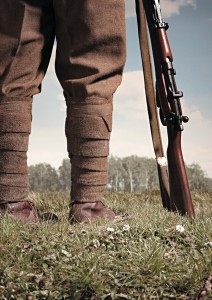 National Theatre Wales’ latest production Mametz, will have a special guest tonight [Thursday 26 June] when the Mayor of the town in the play’s title will be a guest of honour at the production’s press night.

This new play has been co-commissioned by NTW and 14-18 NOW and reimagines the events that occurred at Mametz Wood between July 7-11 1916 to create a powerful human drama.  It was inspired by Owen Sheers’ poem Mametz Wood, which draws on written material by poets who fought in or witnessed the Battle of

Mametz Wood, in which 4,000 of the 38th (Welsh) Division were killed or wounded.  Several key Welsh and English war poets, including Robert Graves, David Jones, Siegfried Sassoon and Llewelyn Wyn Griffith, were among the soldiers who took part in this battle.

The play, which has received financial support from the Welsh Government, will be performed in the Great Llancayo Upper Wood near Usk until July 5.

Culture and Sport Minister John Griffiths, who will also attend the performance, said “I am pleased to welcome Stéphane Brunel, the Mayor of the town of Mametz in Northern France to Wales to see this powerful new production about the important First World War battle which took place near his village.  The centenary of the start of the war in 1914 marks an important opportunity for us to remember all those who took part in the First World War and the transformational impact of the conflict in shaping modern Wales.”