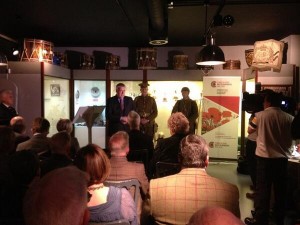 Brought to the Firing Line: Museum of the Welsh Soldier, Cardiff Castle through collaboration with the National Army Museum, the Outbreak 1914: Wales Goes to War exhibition seeks to bring to life Welsh soldiers’ stories of the First World War, focusing on their day-to-day experiences on the front line through artefacts, photos and stories.

The exhibition aims to highlight not only the effect the war had on Wales, but also the effect Wales had on the war. Displays will look at how the Welsh battalions were amongst the first to be sent to France in August 1914 and how the 2nd Battalion of the Royal Welsh Fusiliers also took part in the famous Christmas Truce in 1914.

“This exciting and detailed exhibition shows us how the devastating effects of a war fought thousands of miles away were felt in communities all across Wales. Although we will never truly understand what it was like for Welsh soldiers on the front-line, these artefacts give us a valuable insight into their experiences.

“It’s so important that accounts of war, such as these on display here, are preserved and passed to the next generation. We must never forget the sacrifices that were made for peace and freedom and the important role Welsh people played in securing this for us.”

A smaller display installed by the Royal Mint Museum is also opening at the Firing Line Museum. The ‘…money, munitions and medals’ exhibition highlights The Royal Mint’s part in the First World War focusing on the challenges its workers faced, and the war’s effect on production.