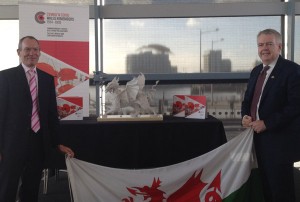 The memorial will be located in the village of Langemark in Belgium and the base of the memorial will be four Welsh Blue Pennant stones from the Craig yr Hesg quarry near Pontypridd which will form a Cromlech and a statue of a red bronze dragon will sit on top of the Cromlech.

The memorial has come about as a result of three years of campaigning by a Welsh committee led by Peter Jones and a Flemish committee headed by Erwin Ureel, with support from the Welsh Government.  The fundraising campaign has raised more than £100,000 to date.

Sculpture Cymru received four designs for consideration and the successful design is by 31-year old Lee Odishow from Tenby and a former student of Coleg Sir Gâr in Carmarthen, where he is now a student mentor.  His recent commissions include a sculpture portrait of  Lt.Colonel Rupert Thorneloe, MBE. – a Welsh Guards Commission to raise money for the Afghanistan Appeal and the Combat Stress charity. He was a finalist in the Broomhill National Sculpture Prize 2011 and has featured regularly in group exhibitions with Sculpture Cymru. In 2013 he was a selected exhibitor at the British Art Medal Society Medal Project XX (20) in London. 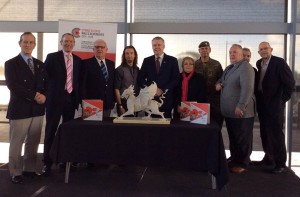 “The Welsh dragon is the symbol of Wales and it is hoped that my proposed sculpture for the memorial at Flanders reflects this. I have deliberately chosen to keep near to the original found on the flag so that should be instantly recognisable to all who visit the site.”

“I’m pleased to unveil the winning design by Lee Odishow for this memorial, which will be a lasting tribute to Welsh people who lost their lives in the First World War.  As this will be the first national memorial outside Wales, it is fitting that the memorial will feature Welsh stones and be topped by a proud, red dragon.”

David Alston Arts Director of the Arts Council of Wales, who co-ordinated the search for an artist along with Sculpture Cymru, said:

“Lee has taken a totally professional approach to the challenge of realising this important commission for Wales and the people in the locality in Belgium. He has responded magnificently to the brief. His proposal is fearsome and handsome in equal measure and the detailing will be superb. In some ways whilst really contemporary, he nonetheless proposes to match the great modellers of the past that you can see in the statuary of the early 20th century around Cathays Park in Cardiff and the war memorial there.” 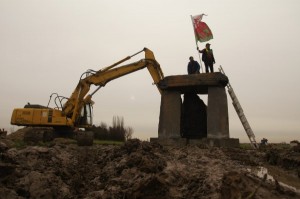 “It was a challenging and enjoyable task, to produce a short list of sculptors from the many excellent and talented practitioners here in Wales.  All of the shortlisted artists produced extremely interesting ideas, however, Lee’s Dragon really captured the essence of the brief and the spirit of the Welsh people rings out from its fierce countenance and posture.”

Peter Jones of the Welsh Memorial in Flanders Campaign said:

“We would like to thank all the people who have donated to the campaign and to all the organisations who have worked towards raising its profile.  Work is progressing well on the memorial and the actual Cromlech has now been completed on site.”